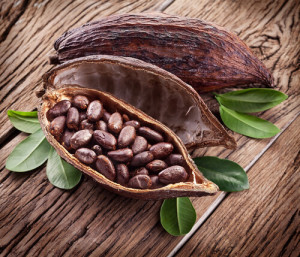 Many people opt to cut all sweet-treats from their diet when considering their athletic or health goals. Check out the article below to learn why it’s worth keeping a stash of dark chocolate around to aid your physical performance.

If you went “cuckoo for Cocoa Puffs” as a kid, you’re not alone. But as adults, we are often faced with a tough decision when offered a chocolaty treat. That’s because we know most chocolate comes in the form of fat- and sugar-rich calorie bombs with minimal performance or fitness benefit.

However, tracking chocolate back to its origin and taking a closer look at the fruit called cacao (pronounced cah-COW) — and its rich phytochemical bounty — gives us more to chew on. In this article, we will indulge ourselves with a look at the body benefits of chocolate as they pertain to CrossFit training and general health and fitness.
The World’s First Sports Drink?

Long before Gatorade there was xocolatl, which Montezuma described as a “divine drink that allowed one to build up resistance and fight fatigue.” This seemingly magical elixir of cocoa powder, water and other ingredients like cornmeal and chili peppers was referred to as “food of the gods,” which yielded cacao’s scientific name, Theobroma cacao, from the Greek words theo (god) and broma (drink).

Cacao fruit (or “pods”) contain seeds (or “beans”) that are used to make cocoa paste and, subsequently, bitter cocoa powder. Cocoa powder can then be processed and blended with milk, sugar, cocoa butter and other ingredients to make the sinful indulgences we are more familiar with today.

Cacao is rich in many compounds, including theobromine, a kinder, gentler relative of caffeine that’s responsible for mild mental stimulatory properties. Cacao also contains tryptophan, which is used to make the calming brain chemical serotonin, along with other nutrients that promote relaxation. These nutrients counteract each other, and research indicates that together they promote a relaxed energy (often referred to as the “cacao buzz”) and positive impact on mood.

Cacao supports circulation and general cardiovascular health. That’s because it’s endowed with specific nutrients called flavonoids, including one called epicatechin, which benefit the cardiovascular system in several ways, including by supporting optimal blood flow as well as desirable blood pressure and cholesterol levels. Optimal blood flow to muscle during and after exercise could translate to performance and recovery maximization because blood delivers oxygen and nutrients to muscle while also removing waste molecules like carbon dioxide and lactic acid.

But researchers attribute much of cocoa’s cardiovascular support to nitric-oxide levels. Nitric oxide is a key regulator of blood flow and works by dilating (or increasing the diameter of) blood vessels. Regular dark-chocolate consumption has also been clearly linked to lowering total and LDL cholesterol levels.

Cacao is packed with an antioxidant arsenal that can be of significant benefit to people who burn more calories and therefore produce more cell-damaging free radicals in their muscle tissue. For instance, researchers found that when cyclists consumed dark chocolate daily for two weeks, they experienced a reduction in markers of inflammation during recovery from a strenuous endurance and sprint challenge. In a different study, nonathletic women who included dark chocolate in their diet for a couple of weeks also improved markers of inflammation.

When choosing chocolate, look for darker chocolates that contain less fat and sugar, such as those that are greater than 70 percent cacao. Consuming 1.5 to 2 ounces of dark chocolate will deliver a beneficial bounty of flavonoids to support cardiovascular benefits. But keep in mind that even extremely dark chocolate has calories to contend with — roughly 200 calories per 1.5 ounce. However, these products contain about half the sugar and way more fiber than lower-cacao options, helping swing the product to the “good for you” side of the balance.

This article originally posted on Yahoo.com.