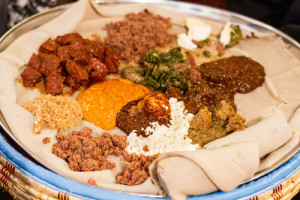 Black Americans who switched to a high-fiber African diet for just two weeks saw a dramatic drop in risk factors for colon cancer, a study published on Tuesday found.

A group of Africans who went the other way and started eating American food rich in animal proteins and fats saw their risks rise over the same short period, according to the paper in the journal Nature Communications.

Researchers said they were not surprised that eating more fiber appeared to lower colon cancer risk, but were struck by how quickly and dramatically the effects showed.

The findings raised concerns about Western diet and about how the increasing “Westernization” of diets in Africa could turn colon cancer into a major health issue there, said Jeremy Nicholson from Imperial College London who co-led the study.

Colon cancer is the fourth deadliest form of the disease, killing more than 600,000 people a year. Rates are much higher in Western countries than in Africa or the Far East.

To analyze the possible effects of diet and gut bacteria, scientists from Imperial College and the University of Pittsburgh in the United States worked with a group of 20 African American volunteers and 20 from rural South Africa.

In the American group, two weeks on the African diet led to significantly less inflammation in the colon and reduced biomarkers of cancer risk. The diet included large amounts of beans and pulses, as well as fish and fruits native to Africa.

In the African group, measurements of cancer risk dramatically increased after 14 days on the Western diet, with lots of food like meats and cheeses. Participants ate fast food, including burgers and fries, and consumed low levels of fiber.

This article originally posted on Yahoo.com.