Sunburns Continue To Cause Damage Hours After Exposure 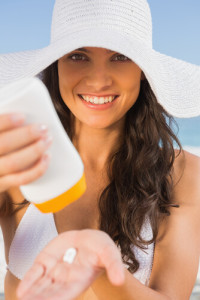 Most people know of the immediate effects of a sunburn, whether it be the literal burn and sensitivity, heightened risk for skin cancer, or eventual peeling that takes place. However, a new study has revealed that sun damage continues for hours after initial exposure.

Looking forward to getting some sun during the long weekend? You may already know that sun rays bring UV radiation, which damages skin cells and will eventually lead to skin cancer for two million Americans every year. But if you still aren’t convinced to slather on sunscreen or wear a hat, consider this: radiation continues to damage your skin on a molecular level for hours after initial sun exposure.

Through a series of experiments with both mice and human skin cells, dermatology professor Douglas Brash of the Yale School of Medicine found that sun damage chemically changes DNA in melanocytes — the type of skin cells that produce melanin, which gives your skin pigment and protects it from sun damage by absorbing sun rays — for two to four hours after UV exposure is over. He’s hopeful that in addition to reminding people about the dangers of UV radiation exposure, his research paves the way for the development of an “after hours” product that can halt DNA damage after your day in the sun is over.

In the short term, people should still “wear sunscreen, wear a hat, and don’t go out between 10 [a.m.] and 2 [p.m.],” Brash told The Huffington Post. “Longer term, we may be able to put on a second sunscreen after we leave the beach and take care of the rest of the problem that the first sunscreen didn’t solve.”

In his study, Brash exposed mice, mice cells and human cells to varying amounts of UV radiation to approximate a “just-noticeable sunburn” — that point at which a slight reddening on the skin is visible after unprotected sun exposure — and observed damage in the melanin-producing cells’ DNA. What was surprising to Brash is that this damage continued to be replicated in the subsequent strands of daughter DNA, which were created hours after initial UV exposure. 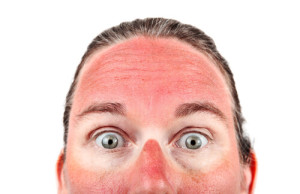 Crucially, Brash was also able to stop these chemical changes in their tracks by mixing vitamin E in with the UV-damaged skin cells in vitro. But while vitamin E seemed to halt the chemical damage in the petri dish, it doesn’t prove that simply applying vitamin E cream directly onto one’s sunburnt skin is going to have the same effect.

“Vitamin E might work, if you can get it into the skin where it needs to go,” said Brash. “But we don’t know whether it actually works — Vitamin E is not a slam dunk.”

For now, Brash thinks his research should simply serve as an additional warning to people who just love getting their sun tan on, and a call to arms for researchers and manufacturers to develop a product for post-sun exposure.

“Maybe it gives people some pause and they think twice about how much time they want to spend on the beach or in a suntan bed,” said Brash. “But real change will come down the road, when we take advantage of this to do something with sunscreen.”

Brash’s study was published February in the journal Science.

This article originally posted on HuffingtonPost.com.