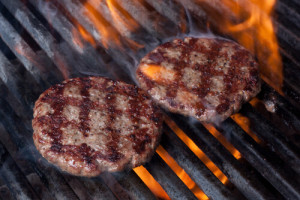 Who doesn’t love picnics and barbecues? Thing is, if you don’t practice safe food preparation, outdoor eating can also set the stage for foodborne illness. Every year approximately 1 in 6 Americans gets sick, and 128,000 are hospitalized from foodborne diseases, according to the CDC. Among 31 known pathogens, most deaths occur from Salmonella, Toxoplasma, Listeria, and norovirus. “The rule of thumb is that no food should be left out for four total hours,” says Amy Goodson, RD, a dietitian at Ben Hogan Sports Medicine in Fort Worth, Texas. “This refers to not just four hours at a time, but four accumulated hours.” The following foods are most likely to ruin your good time.

Undercooked meat puts you at risk for potentially life-threatening illness from a subtype of E. coli bacteria called O157:H7. An outbreak in 2014 linked to ground beef contaminated with this type of E. coli sickened 12 people from four different states. “Your risk largely depends on the number of cows making up your ground beef,” says Michael Schmidt, PhD, professor at the department of microbiology and immunology at the Medical University of South Carolina (MUSC). “The greater the number of cows the greater chance of having something that was not intended to be in the meat.” Ground beef is riskier than specific cuts of meat that come from a single cow. Regardless, cook burgers or any beef to an internal temperature of at least 160 degrees to kill E. coli. 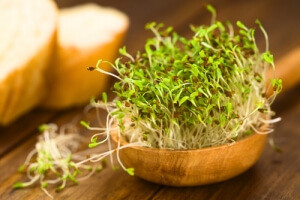 Eating a Caesar salad can make you sick if the dressing is made the traditional way—with raw eggs. (Store-bought bottled dressing is pasteurized; it’s homemade dressing you need to watch out for.) “Pay close attention to anything that could be made with raw or undercooked eggs, especially if they are not pasteurized,” says Lori Zanini, RD, a Los Angeles-based dietitian. The Food and Drug Administration recommends cooking eggs thoroughly and washing all equipment that comes in contact with eggs and your hands with hot soapy water.

This article originally posted on Time.com.