Skipping important health tests could be a matter of life and death, especially for men, who are less likely to see their doctors on a regular basis anyway. Don’t ignore these essential routine screenings. 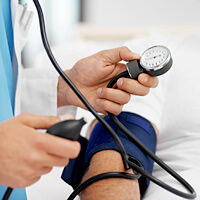 When it comes to men and health care, the numbers don’t lie: Compared with women, men are 24 percent less likely to visit their doctors in any given year and 22 percent less likely to get their cholesterol checked. They’re also less willing to be screened for cancer, despite the fact that their cancer mortality rates are higher.

“Men are stubborn about getting routine health screenings for several reasons,” says Jennifer Landa, MD, a preventive medicine specialist in private practice in Orlando, Fla. “One is fear: They are afraid that something might be wrong with them. Second, a lot of men tell me that they are simply too busy. Third, men don’t tend to be as tuned into their bodies as women, so they don’t notice small telltale signs that things are amiss and just figure any changes can be chalked up to age.”

The problem, she says, is that skipping these routine tests for men’s health can often be a matter of life and death. “Screenings are important because they help us catch disease early,” says Dr. Landa.

Fortunately, most men’s health screenings are simple and quick and can be given in your regular physician’s office. Here are six to add to your preventive care plan now:

A blood pressure screening is one of the easiest, most painless things you can do for your health. It’s so simple, in fact, that there’s just no excuse not to do it. You often don’t even need to go to the doctor — many pharmacies have machines that can check your blood pressure right there in the store.

The National Institutes of Health currently recommends that men between the ages of 18 and 64 be screened at least once every two years, but your doctor may advise more frequent tests depending on how high your numbers are. “The optimal blood pressure ranges are getting tighter,” Landa says. “Optimal is now considered less than 120/80, and 110/70 has been shown in some studies to be the blood pressure associated with better clinical outcomes.” If your readings are high, your doctor can suggest simple lifestyle changes to decrease them, such as putting you on a salt-restricted diet. “Exercise and weight loss are two other interventions that work great to lower blood pressure,” Landa adds.

A cholesterol check is also simple and vital to overall heart health as you age. Measured with a simple blood test, cholesterol screenings for mens health are recommended every five years. You may need them more often, however, if you are over age 45, at high risk for heart disease, or have high levels of “bad” LDL cholesterol or low levels of “good” HDL cholesterol. Optimal cholesterol is less than 200 milligrams per deciliter, but the ratio is important as well, Landa says. “If a patient has an elevated total cholesterol and a very high HDL mg/dL, I may consider the total cholesterol elevation irrelevant.” She adds that the optimal LDL is under 100 mg/dL but that some laboratories consider up to 130 mg/dL acceptable. The optimal triglyceride level is under 150 mg/dL.

Prostate cancer screening has been the subject of some controversy recently, in part because of concern over the possibility of false positives and overtreatment, but many experts say men should still be tested. The primary method of screening is the PSA (prostate specific antigen) test, which measures the level of PSA in your blood. Optimal levels are usually considered to be under 4 ng/mL (nanograms per milliliter).

“The necessity of the PSA test has recently been questioned, but since its institution we have seen a 40 percent decline in the rate of prostate cancer,” Landa notes. “On the other side of the coin, because the test is not specific for just prostate cancer and [PSA levels] can be raised by other conditions, some question whether it leads to unnecessary intervention when there is a false positive.” She recommends discussing with your doctor whether PSA testing is right for you. Another screening option is the digital rectal exam, during which the doctor physically checks your rectum for signs of cancer. Opinion varies widely on how often you should be screened, so talk with your doctor about what kind of schedule is right for you.

Colorectal cancer is the second leading cause of cancer deaths in the United States. According to the American Cancer Society, 103,170 new cases of colon cancer will be diagnosed this year alone — more than half of which will be in men. Because of this, current guidelines say that men should start getting checked at age 50.

There are several testing options for colon cancer. A colonoscopy, for example, involves checking the entire colon with a camera on a flexible tube. A flexible sigmoidoscopy is similar but checks just the lower third of the colon. A CT colonography is a less invasive test that examines the colon using computerized tomography, or a CT scan. And a double-contrast barium enema involves filling the colon with a contrasting substance that will help doctors see problems on an X-ray. “Beginning at age 50, men should receive a flexible sigmoidoscopy every five years, a colonoscopy every 10 years, a double-contrast barium enema every 5 years, or a CT colonography every 5 years,” says Robert T. Grant, MD, a surgeon with New York-Presbyterian Hospital/Columbia University Medical Center.

“Men are actually two to three times more likely to get nonmelanoma basal cell and squamous cell skin cancers than women are, and their risk increases as lifetime exposure to sun accumulates,” says Dr. Grant. “About every three months, men should do a self-examination for new or changing skin lesions.” Also be sure to ask your doctor to check your skin, head to toe, during your yearly physical as part of regular preventive care.

“One-third of Americans with diabetes don’t know they have it,” Grant says. Uncontrolled diabetes can lead to heart disease and stroke, kidney disease, blindness from damage to the blood vessels of the retina, nerve damage, and impotence. “If your family has a history of diabetes, consult with your doctor to see how often you should be tested,” he adds.

If you show some of the symptoms of diabetes, your doctor will probably check you with a blood test known as a fasting plasma glucose test. If results come back greater than or equal to 126 mg/dL on two separate tests, you may have type 2 diabetes.

Don’t let fear keep you from these important checks. “When diseases are picked up early, they are easier to treat and respond better to treatment,” says Landa. “In the case of preventive medicine, the way I practice, I frequently find diseases in the state before they are even diseases.”