Colon Cancer: When Should You Worry?

Admit it: After going to the bathroom, you do the look-back. Don’t be ashamed—it’s one of the best health checks you can do. What ends up in that bowl can provide lifesaving clues that you might have colon cancer. But don’t freak just because you see a little bit of blood. Here’s what too look for—and when you should call your doc.

Red, Purple, or Black Blood in Your Stool 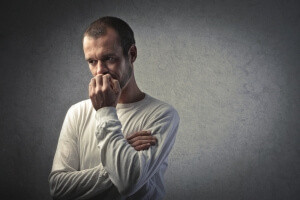 If you have hemorrhoidal disease, don’t assume bleeding is because of that disease. That’s one of the most common avoidable mistakes that leads to delay in diagnosis, says Mark Welton, M.D., a Men’s Health advisor and chief of colorectal surgery at the Stanford Cancer Center. This is a common mistake physicians can make too, he adds.

Blood in the stool also could signal inflammation of the colon, a bleeding ulcer in your stomach, or colitis. If you’re older, have a family history of colon cancer, or have Crohn’s disease or ulcerative colitis, rectal bleeding is a serious concern. You need to make an appointment with your doctor as soon as possible.

Going to the Bathroom More or Less Often

A change in bowels can be normal. Ask yourself these questions:

1) Did you eat something out of the ordinary? Unfamiliar foods can upset your stomach in different ways causing a change in bowel frequency that could be simple constipation or food poisoning—not cancer.

2) Have you been traveling? Some diseases like giardia—an infection in the small intestine—can be picked up in both developed or developing countries when water gets mixed with sewage.

If you’re just noticing that you’re going a lot less, if you’re bloated, and don’t know why you’re not going all of a sudden, see a doctor. It could be the cancer blocking the movement of bowel.

Things other than colon cancer cause abdominal pains, sure. Irritable bowel syndrome (IBS), for one, can have similar symptoms.
However, what distinguishes abdominal symptoms of colon cancer is stomach pain paired with weight loss and poor appetite, Kalloo says. This is when you need to see a doctor.

“Cancer, in general, can cause poor appetite and weight loss,” Kalloo adds. “It may not be colon cancer, it could be pancreatic, but that’s something you need to be suspicious of.”